Just so you understand the context behind this case study, this is a company I used to work for and had been trying to launch their website for 22 months. Yes, you read that correctly. 22 months.

The original draft of the site was ready in November 2016 and I left the company in September 2018, still without having made the new site live. I almost wish I could say I was partly to blame, but I wasn’t.

Anyway, one of the key things I had warned about for the 22 months was that their existing site, despite it being old, antiquated, in a CMS that couldn’t be edited and connected to an ordering system no-one else in the company was capable of changing, it ranked really well for certain high traffic terms.

This was good news.

All they needed to do when moving sites is to make sure that they let Google know that the high ranking pages that used to be in one place and optimised for that keyword – ‘mobility aids’ – were now somewhere else. Not a massively hard job. Probably an hour or two at the most.

It was the sort of thing I was there to manage. And then I left.

And then this happened. 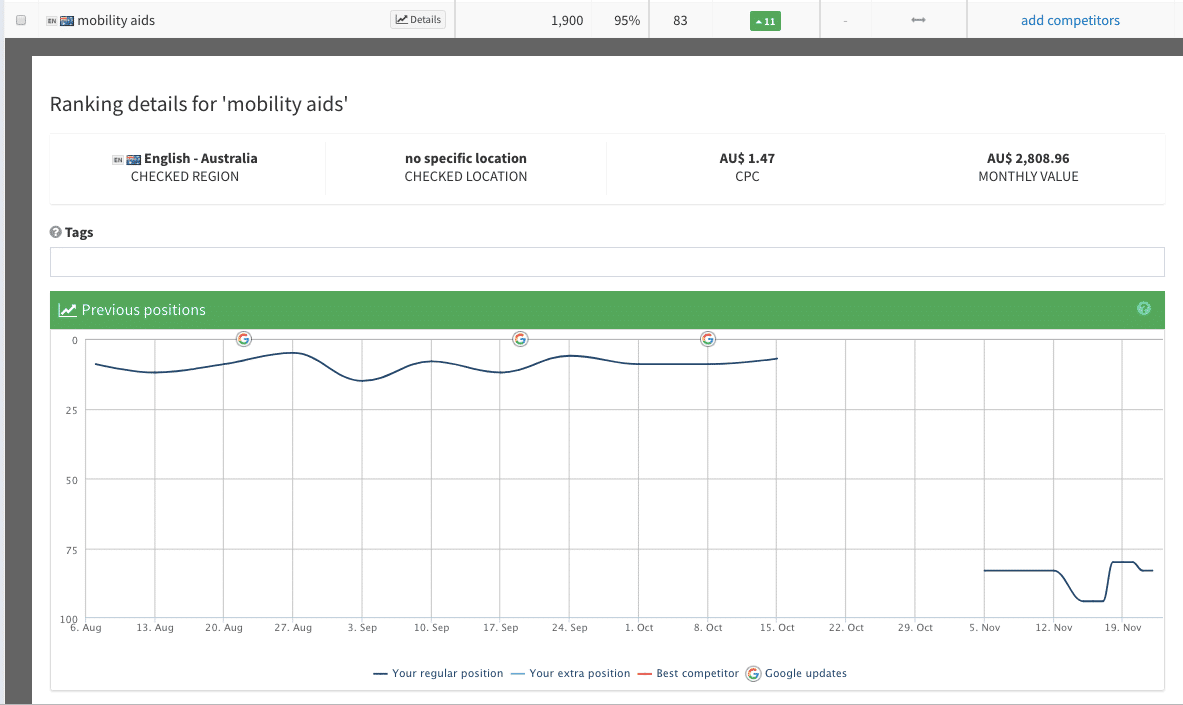 There’s not even a way of framing this result that doesn’t use the word ‘disaster’. One minute, top ten – around the 5th point – the next, below 70. Ker-rash.

That’s 1,900 POTENTIAL CUSTOMERS PER MONTH that are no longer coming to this website.

How much has this cost?

With a new website, we could have potentially got higher than 5th. So maybe 3rd, maybe 2nd. Let’s say we could have captured 300 of those visits. 300 visitors that aren’t being exposed to the brand. Or spending over $100 on products. Could that be $30,000 in lost sales EVERY MONTH?

Maybe. Maybe not. Not everyone would have purchased. But this is a very niche market so the conversion rate would have been higher than normal e-commerce.

Either way, this is a huge cock-up.

On the plus side, it could be recoverable. A short enough time has passed that Google won’t necessarily have abandoned all that link juice from that original page so a team who knew what they were doing could potentially save the situation.

But this is a stark lesson that anyone who simply turns one site off and turns another one on, can potentially do irreparable damage to traffic and revenue.

Photo by Rob Potter on Unsplash

Seven Brand Lessons You Can Learn From Freddie Mercury & Queen

I've been a Queen fan since I was young. Here are some brand lessons we can learn from them.

The Most Important PPC Lessons When Setting Up Your Campaign

There are some very important PPC lessons you should remember when setting up your campaigns.