Business Lessons: What I Learnt From My Newspaper Round

I started a newspaper round when I was 14. It was a local property newspaper that was delivered every Thursday. I believe it was imaginatively called ‘Property News’. They would drop the newspapers off to me that day, and generally, after I got home from school, I’d go out and deliver the newspapers. Used to take me about ninety minutes or so.

The round – the whole of Wickham Way and Bushey Way – consisted of about 220 houses. And I used to be paid by the house. Considering this was back in the wild west employment days of 1988, or thereabouts, it wasn’t a lot. If I remember rightly, my total pay packet every week was £4.14. I used to get it in a little brown envelope about a third the size of a standard DL envelope today. They would write the numbers of coins and the total amount on the outside of the envelope.

There were occasions when I was offered an additional road and the following week, I would extra in my pay packet. That was really exciting because it would go over £5.00 and instead of us the coins in that envelope, it would be lighter and it would feature a neatly folded note. That was the big bucks.

I never forget the first time the newspapers arrived at my home. They sat in two stacks at the front door, tied together with that industrial strapping that was near-impossible to take off unless you had an equally industrial pair of scissors. On top of the pile was a luminous orange paper bag made out of some sort of cheap moulded plastic. It was big – it needed to be – the idea was that you filled up the bag with papers as much as you could and then walked around delivering them to the houses along the street. Hardly rocket science.

The first round presented up the first problem: I could get all the papers required for the entire round in the bag. I was going to need at least three trips to refill the bag. The second problem also quickly presented itself: even if I just did three trips, the volume of papers in the bag at the start of each outbound meant that I was almost dislocating my shoulder carrying it. And it was taking at least half a bag being delivered to become manageable.

So that process lasted exactly one round when I realised I needed to figure out a better way to do it.

He became my designated paper refiller; he’d load up his green VW golf (never buy a green car…that’ll be another blog) and meet me along the round allowing me to continue the round without needing to walk home and start all over again from halfway along the road.

That idea too, lasted one round. Mainly because I couldn’t time properly when I was going to need refilling and at a total of £4.14, this suddenly became a time sink for not just me, but my father too. And he had better things to do than courier newspapers to me.

I joke. That wasn’t the lightbulb moment.

The lightbulb moment was actually a wheelbarrow. A simple trust wheelbarrow. My mother had one in the garage that, whilst it 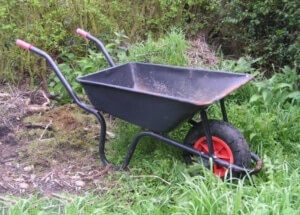 was used a decent amount with her gardening antics, was clean enough to throw the entire stack of newspapers in and wheel around the neighbourhood and deliver the papers from. Even when it had been used to cart about dirt, lining it with a couple of spare newspapers solved that problem.

It was a stroke of genius. I could do my whole paper round in one go, without stopping or going back to refill. The only downside was, given the design and layout of some houses, I used to be able to jump across gardens and lawns and drop three or four papers off in a row without needing to come back to the pavement. But with the wheelbarrow, I would have to backtrack a little to collect it again. It was a minor problem that I was content to deal with.

This even worked in the rain. And there was a fair bit of rain in London. All I had to do was cover the newspapers with a tarpaulin and they were safe while I made the delivery. The houses I liked best were those that had the postbox right at the front off the pavement; that saved having to walk down a driveway to a door.

So that was a good solution. But it was still pretty boring. I mean, I was hardly expecting it to be the epitome of an intellectual challenge but after a while, it started to be a real drag and I begun to try and think of ways to not do it. Enduring repetitive hard work is one of those things that all kids should learn.

Now, here’s the thing. This was in the early days of Walkmans and I had one. But what’s the problem with Walkmans and paper rounds?

You’ve got a Walkman in, you don’t hear the bastard dogs.

So what was the solution? This. 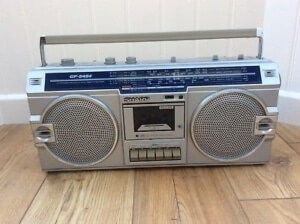 And I actually think this was pretty much the one I had, or something very similar to this one at least. I bought the six batteries needed to power it – I think they were ‘C’ size – and I propped it up at the front of the wheelbarrow and off I went. I used to play my own made-up mix tapes and then I often sang out loud as I walked up and down people’s driveways. I’m sure they were entertained when they caught me singing and killing it on the air guitar at the same time.

I even bought the rechargeable batteries because they disposable ones were costing me a fortune to replace.

The paper round lasted for about 18 months, the buttons fell off the ghetto blaster and I ended up getting a better job that paid more. Cleaning a warehouse.

Five business lessons I learned from this whole endeavour

Photo by Sarah Brink on Unsplash

Generating visitors to your website can be a frustratingly difficult objective for your business to achieve. With browsers flooding search engines like Google, it’s getting harder and harder to stand out from the digital crowd – especially if you’re a small business. The hard truth is: Lead generation is the lifeblood of any business. If […]

The Biggest Commerce Trends in 2020

For many businesses, it’s all about staying ahead of the pack and standing out from the crowd. As consumers, we can look to benefit from a whole host of commerce trends in 2020. Let’s take a look at how our world is set to change.

If the budget allows, every organisation should invest in SEO and SEM.

Should You Create a Business Website? Here’s 10 Pros & 5 Cons

If you’re a small business owner with a tight-knit workforce that doesn’t sell products or services online, you might be thinking to yourself “do I really need to take that next step and build a website?” Put simply, the answer is a resounding YES. Now we know you might be thinking that having a Facebook […]